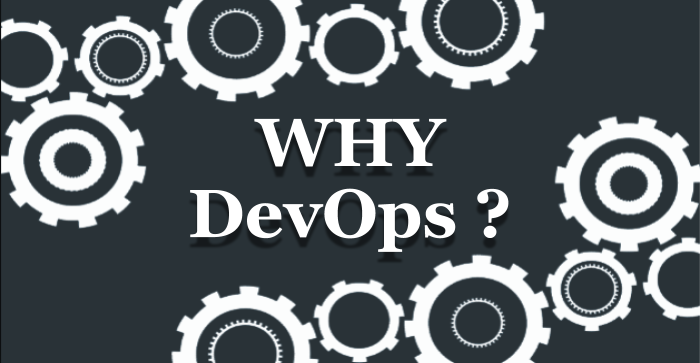 In the words of Karl Hoods- “DevOps is removing the barriers to deliver code more effectively, that is, the code that builds machines, or the code that we deploy. It enables us to move an awful lot quicker, so it’s about making us more efficient and effective when it comes to development and deployment.”

DevOps was invented as a method to bring development and operations team closer. It was intended to work as a bridge between these two functional parts of any organization so that all the misconception barriers can be removed and development and operations teams can work better together. Let’s go through this article to know why DevOps is important for any organization.

DevOps can be described as a culture that bounds together development and operations tasks. Here, I have listed the reasons why DevOps has gained popularity so quick:

When the project completion time is reduced, it comes down to the quality of the final product. Most of the deployment failures occur because testing and programming teams lack coordination. Sometimes, error detection, correction, and recovery of the project take more time than the actual development. It happens because most of the errors are not treated when they first appear. To cure this problem, DevOps comes to the rescue with test automation. Bugs can be detected and cured parallel to the development with the help of test automation. This will lead to fewer chances of deployment failure.
Alex Mathews, EMEA technical manager, explains- “Whereas previously, developers and engineers could only evaluate their own work, the DevOps culture means that they can both instantly evaluate the scope of the entire system and assess the impact of those changes.”

“A company that works together, succeed together.” This is how I explain DevOps for a company’s cultural environment. After DevOps implementation, the development team does not just develop a rough product and hand it over to the operations team to handle afterward. Both teams work together on every phase of the product. This builds a healthy work environment to promote innovation and experiments.
According to Marcus Jewell, VP Brocade, “DevOps is a cross-disciplinary practice that spans all of the roles involved in delivering applications for an organization.”

DevOps can automate most of the tasks of a project which increase efficiencies and make the project less prone to faults. Task automation provides developers with enough time to focus on the tasks that can’t be automated, so the project can be completed quickly.
Another way of increasing efficiency is task acceleration. Have a look at these clear-cut points of DevOps

Kaimar Karu, head of product strategy and development, AXELOS says- “Firms shouldn’t be focused on the DevOps practices themselves – but instead focus on what value has been added by introducing a DevOps culture. For some companies this means ‘faster’ but it could also just mean ‘better’.”

DevOps is not just a hype, it is necessary for every enterprise. If you have made your mind to adopt DevOps into your company, why not work safely with an expert DevOps consultant? Go through our well-researched list of Best DevOps consulting companies and pick the best one for your business.