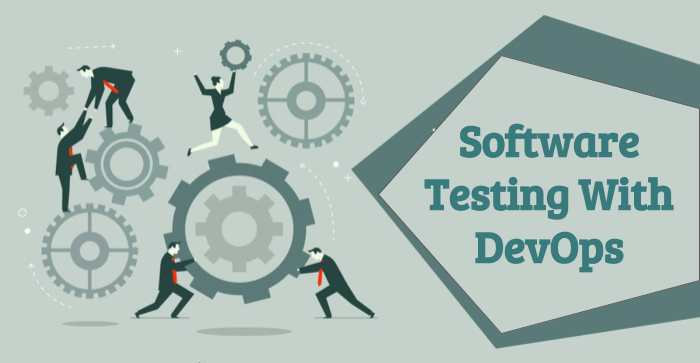 Various questions and doubts have been raised with the rapid acceptance and development of DevOps as a practice. This evolution brings multiple aspects into perspective which should be evaluated and discussed properly. The software testing and development scenario have been changed entirely for developers and testers, both, because of the growth of DevOps. The Role of DevOps inside the Quality Assurance Department is being debated and questioned too. So here arises the question- Will DevOps mark the new phase in Software Testing, or will the further growth of Quality Assurance and Testing be hindered by DevOps?

In ‘The DevOps Cookbook’, Liat Palace, a JAX London speaker, mentioned “One of the major challenges facing every significant change or transformation is how to start. This is especially true in the case of DevOps implementation. There are many definitions of DevOps. From my experience, for example, if you ask for a definition from ten different people you will get ten different answers. Moreover, every implementation is considerably different from all others, and so is the focus and need of the relevant organization.”

How Does Testing fit within the DevOps build?

Have a look at this recent news headline– “The automaker Audi was forced to push the release of its electric SUV by four weeks after failing to gain regulatory clearance for software modified during the development process.” The report explains – “The rise in technology embedded cars has brought several cybersecurity concerns that car software can display. All the necessary steps in the software development process, including building in security measures from the start must be ensured by the automakers.”
These software glitches and occurrences highlight the increasing significance of Software Testing and Quality Assurance. They further add the point that QA requires to follow a protocol to make sure that the software or application doesn’t fail under unexpected conditions and reaches certain regulatory requirements. In the traditional method, Testing and QA follow a particular course where testing and QA team would test the build when it is assigned to them by the development team.

DevOps allows testing and QA teams to crack this course and get right at the origin of the Testing activity. Development and testing teams can deliver applications and software with minimal glitches with the practices and protocols defined by DevOps. It provides them with the ability to deal with unexpected circumstances in real time.

Now when manufacturers and businesses are implementing new and emerging technologies, this kind of protocol is needed more than ever before.

If you are choosing DevOps for the digital transformation of your software development process,
it is necessary that every testing and development element fits into the DevOps cycle. All the testing tasks should be aligned with DevOps practices and conduct. The purpose behind this is to bring speed as well as ensuring agility in the testing process. Additionally, DevOps includes Continuous Development, Continuous Testing, and Continuous Integration, which is impossible to achieve without testing automation. Automation testing will surely increase the speed but parallelly QA needs to assure that with the raised speed quality is held intact.

Here, if QA teams wish to achieve the continuous integration goals defined by DevOps, they need to implement continuous integration tools and specialized automation testing tools into their cycle. With the help of DevOps teams can prove that the test cases are automated and code coverage is nearly 100%. With this, the development environment must be regulated too and the QA package deployment must be automated. Companies are even automating and syncing the pre/pro-testing jobs with the Continuous Integration cycle.

DevOps leads the QA process towards the next level which promotes collective collaboration and contribution. We can’t claim that DevOps is a crucial landmark for QA but it is surely necessary for continuous integration and continuous improvement. The testing process can include various tasks such as Compatibility Testing, UAT, and Performance Testing. DevOps contributes to making it more inclusive and faster.

According to Andy Rowsell-Jones, Gartner’s VP- “Digital initiatives and growth are the two top business priorities for CIOs in 2019. Of top performers, 75 percent have implemented product-centric delivery, creating longer-lived, “ideate-build-run teams” that work on a persistent business issue, rather than focusing on a single point-in-time initiative. This has clear benefits, and drives a closer engagement between IT and the business, faster delivery of new features, and results in a more consumer-centric orientation. In general, the procurement process hates this transition, he cautioned and said this shift requires more of a focus on “DevOps” and a real culture change.”

2 thoughts on “Will DevOps Contribute to the Ongoing Evolution of Software Testing?”