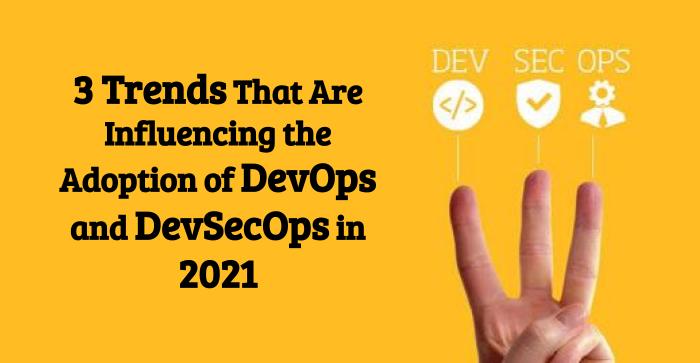 Although it’s important to understand the importance of both DevOps and DevSecOps, they’re not one-size-fits-all, centralized, or eternal paradigms. Instead, both methods are evolving independently, and what DevSecOps looks like this year may be very different from what it looks like next year.

We’ll look at the continuing growth in this blog, isolating and describing three main developments driving and evolving the adoption of DevOps, DevSecOps, and other related development and management approaches.

1. The rise of DevOps

First and foremost, we’d be unreasonable if we didn’t address the single most important trend in DevOps and DevSecOps right now: the fact that both methods have exploded in popularity in recent years.

Most developers and investors understand why these methods have become so common: not only do they offer a more efficient way of handling cybersecurity risk, but they can also render development processes and teams even more efficient.

Since DevOps efficiently distributes required tasks to both organizational and development teams. The more effective they can be, the fewer staff they need to work.

Despite the difficulties in implementing these strategies, the possible benefits are usually seen as justifying the risk. Moving to a DevOps process would be the first step for most development teams, with DevOps transforming into DevSecOps later.

This trend is only expected to continue in the future, making it difficult for companies to recruit talented developers behind their DevOps implementation.

The shift to microservices and containerization has also aided in the acceleration of a similar trend that has been going on for nearly a decade: designing and operating applications in the cloud as the default approach. For many younger developers, the fact that this is a “trend” at all can seem odd. Haven’t we always aimed for data privacy, unless a higher degree of security is required?

Well, no. One of the main headaches of preparing the transition to DevOps back when it was first being implemented as a coding and management model was designing cloud systems that could be easily and securely accessed by teams with a variety of needs – developers, operations workers, and even customer service departments. Now we can schedule software that runs on the cloud on its own now that several well-designed resources exist to fulfil this need, but this is a result of the DevOps model’s success rather than a requirement for its appearance.

Though these trends toward versatility are most often associated with the software development lifecycle, it’s important to note that they originated beyond this field. In reality, the demand for real-time efficiency in manufacturing processes can be directly linked to decades to similar industrial and manufacturing design patterns.

Constructing flexible infrastructure has long been known as the “Agile” method in the production and commercial fields. This method emphasizes the value of infrastructure that is highly reliable, well-connected, and reasonably priced. This also showed large manufacturing organizations the importance of many software company characteristics, such as teamwork, organization, looking to diversify skillsets to achieve agility, rapid iteration, and self-improving working practices.

Now, it appears that the influence is shifting in a reverse way. Industrial designers, in general, have a great deal of experience with IoT networks and have built strategies to design network infrastructures that maintain these systems simultaneously being agile and secure.